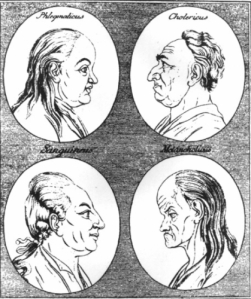 One of the clearest examples of the refashioning of vision into a tool lies in the late 18th and early 19th century craze of physiognomy.  Invented or at least promoted by Johann Christian Lavater the practice became a fad that swept the western world. The practitioners of this, it must be said, quackery, were well intentioned and inspired by the idea that the human face and posture could be read as easily as the novels they were devouring. Lavater maintained that physical traits could reveal a pure inner makeup. The subject need not be present; character was so visibly obvious that, with earnest study,  an artistic rendering could suffice.  A careful scan of superficial beauties and defects of the human face could reveal the essence of the bearer.  To an expert in the science, a pug nose or receding chin could speak volumes.

Lavater identified the most significant bodily features in painstaking detail and developed a system for cataloguing them.  An endless supply of guides were produced and published. And endless numbers of society gatherings focused on this pastime.

Although this form of study was usually a stationary activity,  gathering visual detail was soon reapplied to the study of urban culture, especially in unstable historical moments like the ancien regime and its aftermath.  City dwellers clearly needed a technology of understanding as things fell apart.

Louis-Sebastian Mericier (1740-1814) was an innovator in physiognomy applied to crowds, things, and events. In the early pages of his most famous work, the Tableau de Paris (1782-1783 he announces a project to analyze and evaluate the people, customs, and physical structures of the Parisian street.  Seeing the city as a theater of potential decline and revolution,  he pledges the documentation of the “situation actuelle” (the conditions of the moment).  To Mercier, a city landscape is more than just a place.  It’s an encyclopedia of physical and behavioral detail made all the more interesting because they’re all in a state of flux.

Elsewhere in science there was a lot of interesting in collecting and cataloguing information. But Mercier cites Lavater’s as a forerunner. He declares his intention of creating  “moral physiognomy of this giant capital.”  In this sense, “moral” refers to nearly infinite actions of all classes and conditions of man.  The Tableau  de Paris moves from micro-to  macro techniques of observation as the narrator parses a large trove of visual and behavioral detail.  His urban stroller is a connoisseur of the trivial because the moral and historical secrets of the  ancien regime society hide there.  The body politic and the fate of the crumbling monarchy  are as legible as the low brow of a criminal simpleton.

Paris in the time of Mercier

The farthest back I can knowledgeably talk about is the “picturesque” aesthetic that was all the rage in the 18th century. Most famously promoted by William Gilpin in the last quarter, the movement became a major driver in the growing role of visual aesthetics in poetry, literature and every other popular art of the time. Gilpin published handbooks aimed at training the average educated reader in his or her enjoyment of a bucolic landscape. And it was not just a case of enjoying the view. The picturesque way of seeing was an important means to making the walk productive and transformative.

Typical were publications like “Observations Relative Chiefly to Picturesque Beauty, Made in the Year 1776 on Several Parts of Great Britain and Particularly the
Highlands of Scotland.” (1786). Here,  Gilpin acknowledges his debt to Dutch landscape and genre painters. The solitary walker needs to consciously adopt a “saccadic” gaze that sweeps across land, air, and sea. Further, the viewer needs to carefully frame the landscape and compositional techniques of the Dutch masters.  It’s a practice that requires hard work and talent to do well.
Unexpectedly in this age of the noble savagery, Gilpin consistently maintains that the picturesque way of seeing can only be practiced by a walker who follows a disciplined methodology of seeing.  Natural talents and affinities are required, as is the education that enables the viewer to attend the exceptional scenes of nature while referencing artistic history and convention. A less sensitive practitioner miss the crucial visual detail overlooked by the masses.  Artificial attempts to please will be ignored because the viewer will naturally fix on “..some accidental, rough, object, which the common eye would pass unnoticed.”
Yet talent is not enough. The method is rigorous, demanding physical strength and moral determination.
1. First, the walker must seek elevated ground to execute a “noble sweep” of a panoramic landscape. From a suitable vantage point the subject will find the harmony, propriety, and distinction necessary to compose the scene. The selection and framing of the landscape is crucial to the success or failure of the experience. The natural landscape gets the same close analysis as painting on a wall.
Gilpin: Under every circumstance, a country retiring into remote distance is among
the most beautiful parts of the landscape, and is a very pleasing study to the
lover of nature…He will discover more and more, her magical secrets in the
illuminations of distant objects. He will see with what vivid touches of light
he often marks each prominent part-nearly as vivid as those upon the
foregrounds-at the same time, the shadows being suppressed, and every little
detail, the object takes its proper place in the distance, notwithstanding its
strong illumination.”
This distanced appreciation of natural phenomena becomes a more or less formal “study” of the landscape. The “foreground”, ” shadows” and the “placement of illuminations” are all noted to reveal the “mode of creation” born of the imaginative spirit of an active yet impersonal natural force.
2. Once accomplished, the analytical concentration of nature stimulates the imagination of the observer, who is then moved to immortalize the scene. The painting, poem, or musical composition will overcome the limitations of natural, untutored perception. The picturesque enables the spectator to :
“…body forth,
The forms of things scarce seen,
turn them to shape, and give to airy
nothing,
a local habitation.”
Walking, seeing, and selecting a transformative landscape becomes the most effective tool to creating Romantic art.   In the later pages of this volume, he places a sketch book in the hands of the walker, and counsels him on the principles of composition and the techniques of drawing the “sketch”. Moreover, according to Gilpin, the written text is an equally feasible product of these moments of experience. In his introduction to this work, he asserts that this method of observation engenders a “novel mode of writing” characterized by luxuriant language and a penchant for “deviation into poetical phrase.”